Posted by Fergus McNeill on Monday, March 3, 2014 · Leave a Comment

Thursday 27 February 2014, lunch time. I leave Brussels and take the plane to Edinburgh to meet my COST friends in Glasgow for another meeting. I was looking forward to it. The COST network has become a vested part of my academic life and it is always a pleasure to meet, discuss and have fun together. Fergus McNeill picked us up in Glasgow and drove us in a  Glasgow University minibus to Ross Priory, a fascinating, historic building which dates back to around 1693 and which is located at Loch  Lomond. 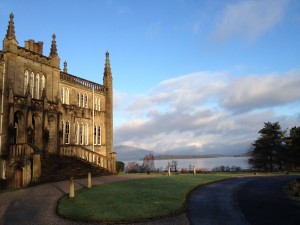 We were there to discuss a new book project that Gwen Robinson and Fergus have set up. Nine academics from different jurisdictions (Scotland, England & Wales, Northern Ireland, Republic of Ireland, Belgium, Hungary, Spain, the Netherlands and Germany) were united around a dinner and conference table for two evenings and a day. Taking into account that Ross Priory is quite remote from the outside world and that we were the only guests in this venue, there was no escape! 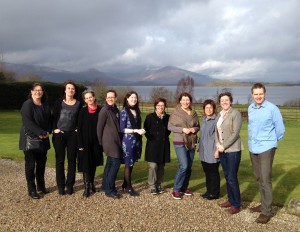 On Friday morning Gwen warmed us up with a presentation of the ’story so far’, explaining the genesis of the book project, revealing the title of the book, which I will not entirely give away here. But the fact that the book title contains ‘Community Punishment’ fuelled immediately debate about the delineation and the definition of our research subject. Can and should ‘community punishment’ replace familiar and widely used terms like ‘probation’, ‘non-custodial measures and sanctions’, ‘alternative sanctions’, ‘offender supervision’, etc…? Will we concentrate on supervisory or also include non-supervisory punishments like fines for example? It was not the first and will not be the last time that we have these conceptual and language discussions in our network, because it is not only a question of translation. Words and concepts express meanings that are culturally sensitive and express ideologies and visions on punishment. Different jurisdictions use different terminologies and in Belgium and Spain, for example, the term community punishment does not even exist officially. The term alternative sanctions and measures is the most established.  So, the big question is:  where does ‘Community Punishment’ stand for?

This question became immediately linked with another: whether to focus on punishment discourses and practices in the pre-sentence or post-sentencing phase or both? Moreover, several members also suggested including the wide range of new punishment practices outside the field of criminal policy, referring for example to the increasing use of administrative sanctions.

I have always preferred the word ‘punishment’ instead of ‘alternative sanctions and measures’. This last concept is particularly popular with policy makers and practitioners (in any case in Belgium). Judges still talk in terms of  bestowing ‘favour’ when they impose a suspension or conditional sentence combined with probation measures, suggesting they are not real punishments. My resistance against the concept ‘alternatives’ is also based on the fact that it maintains imprisonment as the default punishment, at least on a discursive and thus symbolic level. It undermines the punishing aspect that each judicial intervention might have and thus also the credibility of all sentences or interventions that are not directly linked to detention.

Long ago Tony Peters, a Belgian penologist, compared this link with an umbilical cord, which has to be cut in order for us to recognize the autonomous and punishing dimension of these so called ‘alternatives’. They have to be judged on their own merits and peculiarities and be recognized as sanctions on their own. Different forms of supervision, aiming to be rehabilitative can also be punitive or be experienced as intrusive. Therefore I fully agree with the editors of the book in deciding to encourage us to write about community punishment. There are more good reasons to choose this concept, but this will be explained in the book J.

Another discussion that popped up was what has to be understood by ‘community’. Which meaning does community have in late modernity? And which role does the community have to play in the administration of punishment? First of all the community is the location where the convicted persons (a good French word is ‘justitiable’, which expresses that these people are subjected to a judicial intervention) ‘do their time’. Here the community is a kind of a neutral term referring to all places except prison. And again we were confronted with the fact that is still almost impossible to talk about punishment without referring to prison and detention. Christine Morgenstern from Germany proposed the term ‘ambulant’ to refer to all practices that take place outside prison.

Kerstin Svensson from Sweden raised the question of the role of the state and the link with developments in the administration and organisation of supervisory functions in different jurisdictions. Relevant questions that were raised here included: Are there differences between supervisory measures carried out by civil servants, by civil society groups or agencies that are controlled by the Executive. Are the agents of community punishment paid by the state and do these agencies work under the direct control of the state? So who are the delivery organizations? And of course, will other jurisdictions follow the developments of privatisation, which are taking place now in England & Wales?

Ross Priory was an inspiring place, even more so in the evenings. During and after dinner we discussed different alternative or creative ways to communicate the findings of our comparative endeavour to a broader audience at the final conference, which will probably take place in Brussels in Spring 2016. We believe that inviting artists in residence into the Action in its final year could help to creatively express and represent ideas about supervision in all sorts of ways. We could also present our findings in the form of a ‘pecha kucha’ (pronounced as ‘pechacha’); a presentation style in which 20 slides are shown for 20 seconds each (six minutes and 40 seconds in total). We were even thinking of doing a flash mob in a Brussels public space. And why not compose a song on supervision and sing it together? Searching for a good beat Fergus came up with ‘Psycho Killer’ of the Talking Heads. And yes, the song makes sense if we replace Psycho Killer with the word ‘Supervision’ and adjust a few lyrics here and there:

I can’t seem to face up to the facts

Confuse the carceral with the penal act

I can’t see past these prison walls

Don’t see nothing til the Action calls

We got out hours ago

We’re sadder than you’ll ever know

We feel their eyes on us every day

You start a conversation, you can’t even finish it

You’re talking a lot, but you’re not saying anything

When I have nothing to say, my lips are sealed

Say something once, why say it again?

We are vain and we are blind

I hate people when they’re not polite

My suggestion was to invite David Byrne to the conference and ask him to sing this for and with us. Dreaming is allowed since, after all, nothing venured, nothing gained!

COST is supported by the EU Framework Programme Horizon 2020

The views expressed on this website are the sole responsibility of the author and do not necessarily reflect the views of COST.