This post comes from Jake Phillips of Sheffield Hallam University…
From 23rd to 26th March 2015 the Department of Law and Criminology at Sheffield Hallam University hosted its first annual Social Justice Week. One of the events that took place was an extended seminar on how institutions can support the process of desistance and recovery. We heard from several commissioners of drug services about how the recovery movement (which bears many similarities to the ‘desistance movement’ in terms of its aims and focus on the service user over and above predetermined outputs) has manifested in policy and practice. Alongside this seminar some of the photos that have been generated via the Supervisible and Picturing Probation projects were exhibited. The seminar itself focused on ways in which policy can be devised and services can be commissioned in a way which meets the needs of service users. In the context of these policy focused discussions, the photos provided a useful reminder that we are dealing with real people who have their own unique experiences and views on supervision and the process of desistance. 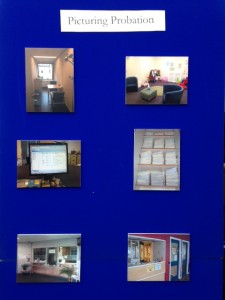 Moreover, the photos generated by the Picturing Probation project reminded us that whilst good policy and commissioning can support desistance, policy rarely translates neatly into practice. For example, the photos made it clear that the places in which supervision occurs can affect the ways in which offenders both perceive and receive their period of supervision and this is crucial for future policy development. Moreover, the Supervisible photos reminded us that the people who find themselves under supervision have lives outside the probation office and that these are often hugely different environments to those in which practitioners work.

It was great to see the photos from the two different projects side by side for the first time. The most striking observation that we made was that the Supervisible photos were emotive and organic, portraying a sense of a lived experience. This was in stark contrast to the more structured and non-organic photos in the Picturing Probation series. This may, of course, be a product of the different methodologies adopted by the two projects (Picturing Probation was, by necessity, more directive in terms of what photos participants took) but it will be interesting to see whether these immediate differences persist as we generate more photos from around Europe. These are, of course, snapshot impressions which need more structured scrutiny but there seemed to be an immediate benefit in terms of thinking about offender supervision in this way. 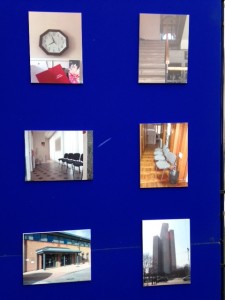 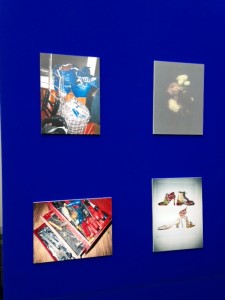 The technique itself clearly engaged participants in the seminar and the photos presented an opportunity to put probation on the map and communicate its contradictions and positives to the public and other academics. They certainly made an impact with attendees at the seminar, with comments serving to reinforce the value of utilising visual methods to provide an additional lens through which to examine both the practice and experience of probation supervision:

“The photographic images presented in Supervisible provide powerful insight into the lived experience of probation supervision across Europe. For me, the images both individually and collectively intimate a variety of emotions that underpin the complex stories of those ‘on probation’.”

“I had not previously come across photo-voice techniques within my discipline, but one would imagine that given their ability to convey experiences of ‘crime and justice’ such creative visual methods are likely to become more widespread in criminological research. I look forward to seeing how this project develops. (Seminar attendee)”

Returning to the seminar itself and its relevance for the Offender Supervision in Europe network, we heard from several commissioners of recovery services (both local and national) who made strong arguments in favour of localised commissioning, which brings the needs of local community in line with the services offered, and the need to be flexible and adaptable to changes in the local community. Moreover, we heard how this approach has been used to great effect in the world of recovery. There seemed to be a great disparity between how commissioning works in the field of recovery and how it is working now in the context of the Transforming Rehabilitation (TR) agenda in England and Wales where commissioning has been conducted at the national level with 10 year contracts being signed with private providers.

On a related note, the drug services commissioners were clearly great believers in the power of relationships between service users and professionals to empower service users during their recovery. This immediately raises questions about the proposals by the newly privatised CRCs (that provide services to low and medium risk offenders) to reduce their workforce by 30% and replace professionals with biometric kiosks.

The seminar was not wholly depressing in terms of how the criminal justice system can support desistance. We heard from several policymakers and academics about projects which do just that. However, there were regular reminders that the ‘best’ way to go about supporting desistance is through flexible, individualised and supportive environments for both service users and staff. Whether that becomes possible in the world of probation in England and Wales post-TR remains to be seen.

COST is supported by the EU Framework Programme Horizon 2020

The views expressed on this website are the sole responsibility of the author and do not necessarily reflect the views of COST.